From “Saints and Citizens” 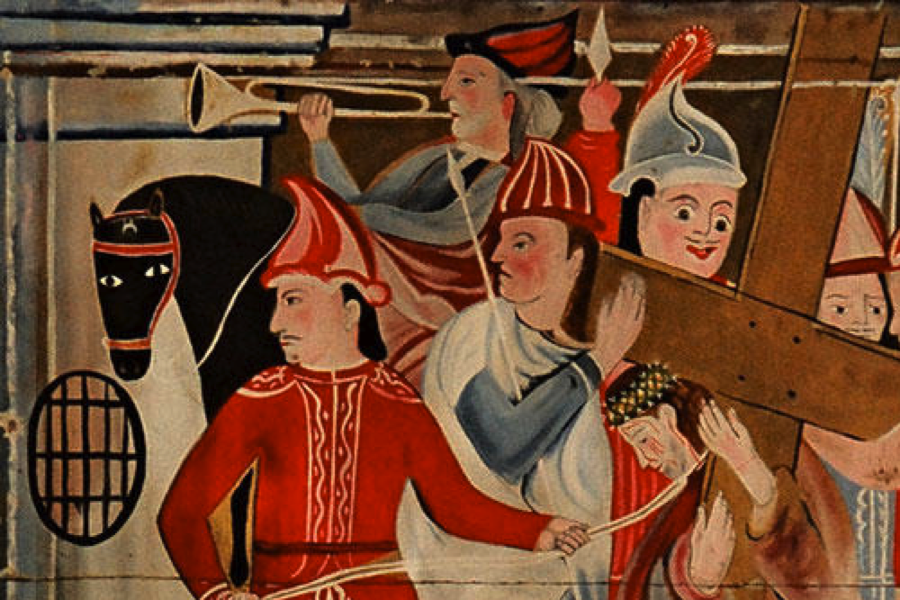 Ever since Lisbeth Hass’ book talk last year at the California Historical Society on Saints and Citizens: Indigenous Histories of Colonial Missions and Mexican California (University of California Press, 2013), the stare of this horse has loomed quietly over me, reframing the way I think about California’s history of art and activism.

Haas is a time traveler who combines scholarly objectivity and with a loving commitment to Indigenous agency. In describing the complex lives of Indigenous Californians as they navigate the unprecedented reorganizing of their world by Spanish colonial mission system at the turn of the 19th century (1769-1824), Haas pays particular attention to the visual culture of the California missions and the creative practices of  Indigenous artists as they become a part of the Catholic colonial enterprise. Her careful interpretation of mission paintings by Indigenous artists reveals Indigenous representations of Indigenous power and leadership embedded within their interpretations of traditional Catholic iconography­­–a striking example of native art and political agency from Indigenous California’s earliest moments European imperialism.

The horse in the image above is one of many portrayed by Indian painters at Mission San Fernando (later moved to Mission San Gabriel Arcángel) in a series of fourteen paintings of the Stations of the Cross, a common Roman Catholic visual series which depicts Christ carrying the cross to his crucifixion. Haas offers subtle observations and interpretations about numerous aspects of the paintings: the soldiers clothing, the range of skin tones, the treatment of Christ and the depiction of women. But it is the horses that she makes so riveting. According to Hass, “unlike any of the other figures in the scenes…the many horses in the series consistently look directly at the viewer with varying intensity of gaze. Even when the horses’ bodies are depicted sideways, the painters placed the horses’ two eyes and heads looking at the viewer. They painted almost every other figure in profile, but never the horses.”

“Unlike any of the other figures in the scenes…the many horses in the series consistently look directly at the viewer with varying intensity of gaze. Even when the horses’ bodies are depicted sideways, the painters placed the horses’ two eyes and heads looking at the viewer. They painted almost every other figure in profile, but never the horses.” –Lisbeth Haas

Haas goes on to describe the prominent way the horse had become integrated into Indigenous systems of meaning and power. Brought to California by the Spanish, the horse was essential to establishing colonial authority. Colonial rules prevented most Indigenous persons from riding them, thus making them status symbols in an extremely hierarchical system. However, Haas’ own close evaluation of the prominence and unique representation of the horses throughout the Stations, leads her to conclude that their significance moves beyond symbols of status and colonial rule. The horses become “something else in native sacred thought and iconography.” She notes that in the Indigenous California language of Luiseño, the term for horse and cow, as, was synonymous with the term for the “shaman’s familiar” or “spirit helper,” indicating that Indigenous thinking had transformed an animal associated with political defeat into “shamanic spirits” that augmented Indigenous power.

Lisbeth Haas is Professor of History at the University of California, Santa Cruz, and author of Pablo Tac, Indigenous Scholar: Writing on Luiseño Language and Colonial History, c. 1840 (UC Press, 2011) and Conquests and Historical Identities in California, 1769–1936 (UC Press, 1995).

Saints and Citizens (UC Press, 2013) is a bold new excavation of the history of Indigenous people in California in the late eighteenth and nineteenth centuries, showing how the missions became sites of their authority, memory, and identity. Shining a forensic eye on colonial encounters in Chumash, Luiseño, and Yokuts territories, Lisbeth Haas depicts how native painters incorporated their cultural iconography in mission painting and how leaders harnessed new knowledge for control in other ways. Through her portrayal of highly varied societies, she explores the politics of Indigenous citizenship in the independent Mexican nation through events such as the Chumash War of 1824, native emancipation after 1826, and the political pursuit of Indigenous rights and land through 1848.