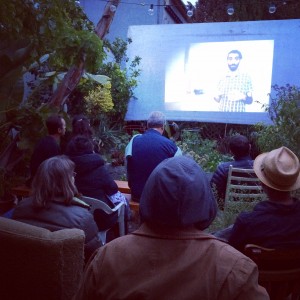 As a part of The Dissidents, the Displaced, and the Outliers transbay exhibition, the Bay Area Society for Art & Activism has created a public programming series that reflects the exhibition themes of privacy, surveillance, and gentrification that affect housing security for citizens in the Bay Area.

We organized an outdoor film salon on May 9, 2015, hosted by our friends and exhibition partners at Random Parts gallery (Oakland, CA). Curator Dorothy Santos researched and gathered a collection of short videos that draw connections between the art works on exhibit and open up fruitful and productive conversation around narratives of displacement. For those that were unable to join, the links to the salon videos are provided below. Please feel free to view the content and join the conversation.

The Dissidents, the Displaced, and the Outliers features work by Anti-Eviction Mapping Project, Eliza Barrios, COLL.EO, Leslie Dreyer, Tom Loughlin, and Elizabeth Travelslight and remains on exhibition at Random Parts through June 5th. Its San Francisco location opens on on May 16, 5-9pm at
Incline Gallery. RSVP and more information about the exhibition and upcoming public programming dates here →