The Dissidents, the Displaced and the Outliers: Closing Panel Discussion Recap! 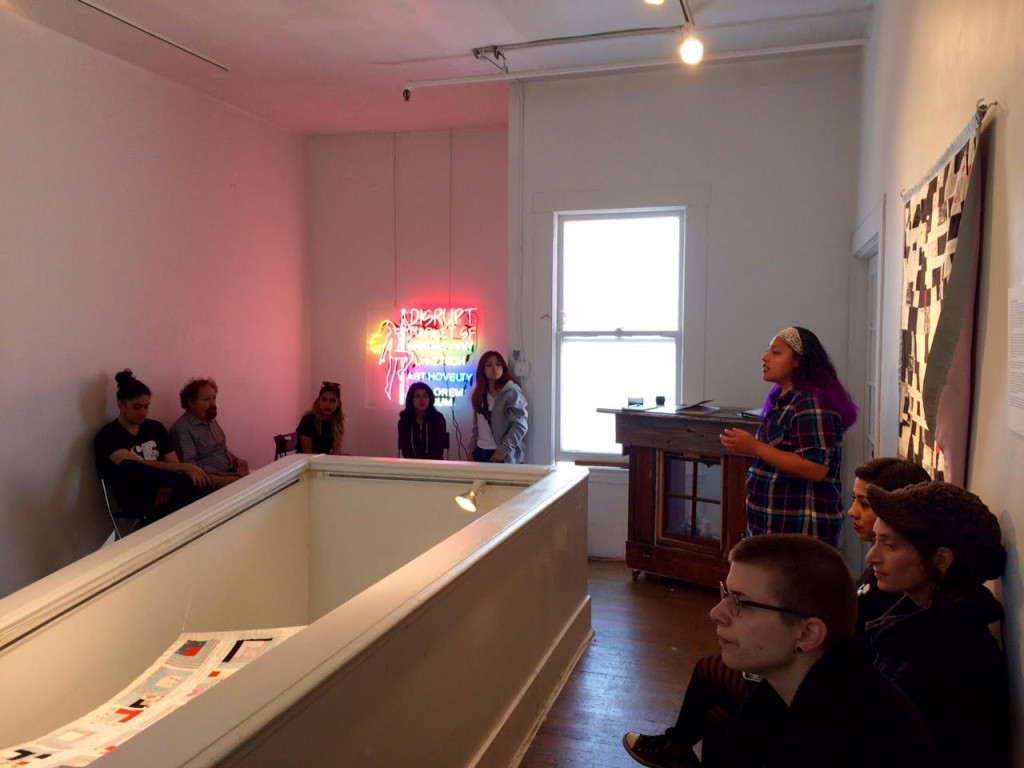 I can’t believe it’s been almost a year since I was originally asked to curate a show on privacy, surveillance, and their effects on gentrification in the Bay Area. As much as one would like to think that they are seemingly disparate issues, I’ve come to learn that they are much more intertwined than we would like to think. When thinking about curating the artists, I conducted studio visits and selected their works based on the premise that they added a different dimension to this already complex and multi-faceted economic and cultural climate we find ourselves in.

In thinking about the public programming for the exhibition, I had to think about bringing people together from different artistic practices and experiences. I had the good fortune of meeting the panelists for the closing panel along my research of the topic as well as through conversations that I wanted to carry on the format of the panel. Each presenter touched upon aspects of the themes from the exhibition and how their work related to the topics that would allow diverse voices to be heard. If there’s one thing I’ve learned these past few years, the Arts is, intrinsically, based in gathering and organizing community. But economic structures and systems often dictate market that reinforces and keeps arts and activism mutually exclusive in the overall realm of art. Through the work I’ve done throughout this exhibition, I’ve learned my place in helping to dismantle a lot of that thinking by bringing people together that may not normally be in conversation with each other.

Katherin Canton, teaching artist with Youth Arts Exchange presented her pedagogical approach of storytelling by working with high school students these past few years by teaching documentary-style photographic essays and mentoring her students through methods of interviewing the subjects of portraiture. While Canton’s focus was primarily on gentrification, the common thread in her findings was this notion of home. But what is home when you are displaced? Connecting back to the show’s content, a home diminishes when the market dictates and what the most vulnerable are given very little choice and resources.

Valeria Gress followed shortly after with her photographs and experiences. As a former student to Canton, I found her photography a prescient view of what younger generations of San Francisco natives have to offer. Gress uses analog photography shows the depth and care she has put into capturing the narratives of immigrant families and underrepresented communities. Her work actually is freed from the confines of privacy and digital surveillance. During the open discussion, one of the artist from the show, The Society’s own Elizabeth Travelslight, commented on the analog as an fascinating contrast to the digital nature of the Anti-Eviction Mapping Project. But it was also great to hear a younger perspective that often gets left out of these types of dialogues.

Nadia Kayyali, activist with the Electronic Frontier Foundation (EFF), gave a wonderful overview of the connection between digital technologies, surveillance, and gentrification. Her passionate work with EFF as well her activism in a multitude of communities throughout the Bay Area speaks shown through in her talk of how existing and new technologies police and target specific types of communities that have a direct effect on housing security, physical well being, and the comfort of safety and protection of citizens. For instance, StingRay surveillance mimics cell phone towers, but in actually an obtain the information of citizens without their knowledge. Kayyali also showed a map of license readings from the Oakland area showing the poorer and low income areas as primary locations for these types of surveillant technologies. The reality that set in for me, as a writer and curator, was the fact that displacement leads to gentrification because concepts such as beautification happen when a specific demographic decides to invest in a particular area. COLL.EO’s work “The Cure for Homeless” in the exhibition (shown at Incline gallery), depicts the dialogue on the Electronic Arts forum regarding the inadvertent bug in the SimCity game that produced homeless avatars. Despite the seemingly absurd and, sometimes, humorous nature of the conversations that ensued amongst players; many had solutions that were not too dissimilar to the way local government agencies handle issues of displacement and gentrification. It becomes a game of speculation and the way to best observe is to survey the ones perceived and deemed to be the problem.

To round out the presentations was co-founder of the Anti-Eviction Mapping Project, artist, and scholar, Erin McElroy. In going through the mapping project, we were able to take a closer view into the data visualization project that provides data and narratives of displacement throughout the city as a result of the ellis act, no-fault evictions, and cases of people in POC communities killed by police to name a few instances of the project. While maps seem self-explanatory, McElroy’s guidance of the map made the work all the more pertinent to its inclusion in the show and its connection to all of the other works that hopefully carry on the necessary dialogue around how technology and Fox Harrell’s notion of critical computing can creatively expose us to narratives that would otherwise go unnoticed.