Wartime Revival of the Senses 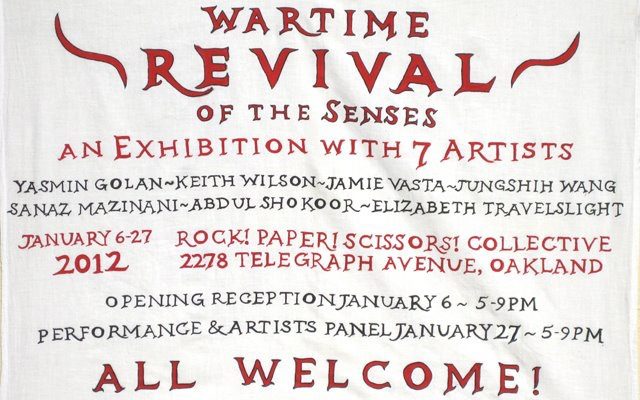 Wartime Revival of the Senses is an exhibition that uses visual material and sensory engagement to “bring alive” the U.S.’s wars with Iraq, Afghanistan, and Libya. The rationale for the show stems from war’s current invisibility in the news media and popular conversation: While today’s citizens are familiar with armed conflict in an abstract sense, fewer and fewer people can identify reasons for the United States’ involvement in its three current wars, or even locate the sites of these wars on a map. In the spirit of recovering what is hidden, Wartime Revival asks seven artists to explore different ways of visualizing foreign conflict. The show, in partnership with EMERGENCY USA: Life Support for Civilian Victims of War and Poverty, makes this inquiry as a way of commemorating two events that have been under-examined in art discourse: the ten-year anniversary of the U.S. invasion of Afghanistan (October 7, 2011); and the two-year anniversary of the death of pacifist historian Howard Zinn, author of “Artists in Times of War” (January 27, 2012).