Posted on March 7, 2014 by Elizabeth Travelslight — No Comments ↓ 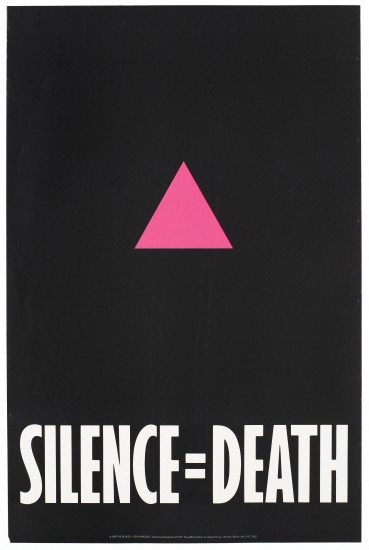 An advertisement for The Silence = Death Project used by permission by ACT-UP, The AIDS Coalition To Unleash Power. Color lithograph, 1987. (Courtesy of Wellcome Library no. 669136i Photo number: L0052822)

Link TV is currently hosting the complete documentary film United in Anger about the provocative, visually stunning, grassroots, direct-action work of ACT UP (the AIDS Coalition to Unleash Power). You can stream it here for free.

“United in Anger combines startling archival footage that puts the audience on the ground with the activists and the remarkably insightful interviews from the ACT UP Oral History Project to explore ACT UP (the AIDS Coalition to Unleash Power) from a grassroots perspective. It shares how a small group of men and women of all races and classes, came together to change the world and save each other’s lives. The film takes the viewer through the planning and execution of a half dozen exhilarating major actions, including: Seize Control of the FDA; Stop the Church; and Day of Desperation, with a timeline of many of the other zaps and actions that forced the US government and mainstream media to deal with the AIDS crisis. This documentary reveals the group’s complex culture — meetings, affinity groups, and approaches to civil disobedience mingle with profound grief, sexiness, and the incredible energy of ACT UP. “